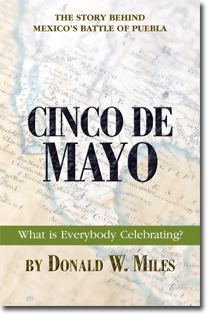 Don Miles, author of the highly-praised history, Cinco de Mayo, has put together an excellent website for the upcoming festivities including a reenactment in Austin, Texas in 2012, which mark the 150th anniversary of the Battle of Puebla. No, Cinco de Mayo is not Mexico's Independence Day (that's in September), but a celebration of a temporary but astonishing victory of the Mexicans over the French Imperial Army at Puebla in 1862. Read a fascinating, detail-packed interview with Don Miles about Cinco de Mayo here.
Posted by C.M. Mayo at 8:01 AM