Maximilian in Mexico: A Woman's Reminiscences of the French Intervention 1862 - 1867 by Sara Yorke Stevenson 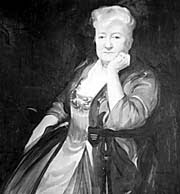 Of all the English language memoirs of the Second Empire / French Intervention, Sara Yorke Stevenson's Maximilian in Mexico: A Woman's Reminiscences of the French Intervention 1862 - 1867 is the most lucid, informed, and balanced. That said, she introduces her book with this caveat:

[M]y aim is not to write a historical sketch of the reign of Maximilian of Austria, nor is it to give a description of the political crisis through which Mexico passed during that period. My only desire is to furnish the reader with a point of view the value of which lies in the fact that it is that of an eyewitness who was somewhat more than an ordinary spectator of a series of occurrences which developed into one of the most dramatic episodes of modern times.

Academic histories can be a bit dry and, as Yorke puts it, too often the personalities of a period, puppet-like, seem to appear "before the footlights of a fulfilled destiny."

During the brief reign of Maximilian, the author was a young girl living with her family in Mexico City. Every country's capital is a small town, in a sense, but in the 1860s, Mexico City was so small, both literally and figuratively, that this young girl, whose parents were well-connected in both and French and Confederate circles, became acquainted with many of the leading political and military personalities.

She writes, "to those who lived with them when they were MAKING history, these actors are all aglow with life. They are animated by its passions, its impulses," and indeed, she renders them beautifully, compellingly into life.

Before rejoining her family in Mexico City, in Paris, through her guardian, M. Achille Jubinal, a literary figure, antiquarian, and deputy in the Corps Legislatif, she happened to meet none other than the Duke of Morny, Louis Napoleon's half-brother and a key player in the tragedy that was Mexico's Second Empire. 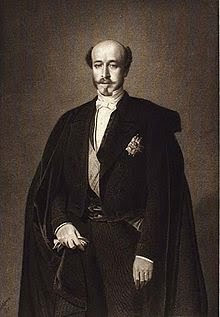 One day in March 1862... M. Jubinal invited me to accompany him to the Hotel des Ventes, Rue Drouot, where an important collection of tapestries and other objects of art was on view to be sold.... My companion was pointing out to me the beauties of a piece which he particularly coveted when some one came behind us and called him by name. We both turned around and faced a middle-aged man whose dress, manner, and general bearing showed him to be a personage of some importance. M. Jubinal, who evidently knew him well, addressed him as "M. le Duc," and his strong likeness to the Emperor [Louis Napoleon], as well as a few stray words, soon led me to guess, even before my guardian had gone through the form of an introduction, that he was no less a personage than the Duc de Morny.

When he learned that her brother had killed by bandits on the highway in Mexico, and she would therefore be leaving France to rejoin her family there, the Duke said: "Lorencz is there now; our army will then be in the city of Mexico; the roads will be quite safe, have no fear." Aficionados of Mexican history will know that this was, in fact, two months before Cinco de Mayo, the massive, humiliating defeat of the French at the city of Puebla.

Her journey from France to Mexico, on an "old patched-up ship," was a sobering one. She writes:

There were only forty passengers on board, and, comparatively speaking, little of the animation that usually precedes the outgoing of an ocean steamer. I found without difficulty the French banker and his Mexican wife who had kindly consented to chaperon me during my lonely journey; and I soon discovered that she and I were the only women passengers on board.

Our fellow travelers were uninteresting-- mostly commercial agents or small tradesmen representing the old-established petty commerce with Mexico. The new order of things was suggested, somewhat ominously, only by the presence of two young surgeons on their way to increase the effective force of the military hospital in Vera Cruz.

Evidently the predicted exodus to El Dorado had not yet begun. Where was the advance-guard of the great army of emigrant capitalists now about to start, and of which I had heard so much?

This was the first serious disillusion of my life, and it left a deep and permanent impression upon my mind. 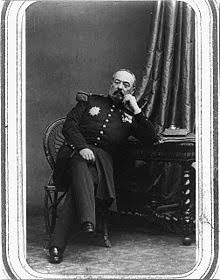 new life in the Mexico City of Maximilian's Second Empire, she writes:

We then lived at Tacubaya, a suburb of Mexico [City] reached by the Paseo, where the marshal [General Bazaine]rode everyday for exercise. Our house was built at the foot of a long hill, at he top of which stood a large old mansion, the yellow coloring of which had won for it the name of the Casa Amarilla. It had been rented by Colonel Talcott of Virginia, who lived there with his family. Dr. Gwin was their guest; and it was arranged that the marshal , when taking his usual afternoon ride with his aide-de-camp, should call upon us one day, and leaving their horses in our partio with his orderlies, should join us in a walkup the hill, casually dropping in en passant at the Casa Amarilla.

The plan had the double advantage of being a simple one and of providing the marshal, who did not speak English, with suitable interpreters. The interview was a long one. The marshal listened to what the American had to say. Indeed, there was little to be said on his own side, as the Mexican ministry was absolutely opposed to the project, and any change of policy must depend upon a change in the imperial cabinet.

His Excellency, however, seemed in high good humor. As we came out, he merrily challenged us to run downhill, much to the astonishment of the few leperos whom we happened to meet. The Mexican Indian is a sober, rather somber creature, not given to levity; his amusements are of a dignified, almost sad nature. He may be sentimental, bigoted, vicious, cruel, but he is never vulgar, and is seldom foolish. Indeed, well might they stare at us then, for it was no common sight in the lanes of Tacubaya to see a commander-in-chief tearing downhill, amid peals of laughter, with a party of young people, in utter disregard of age, corpulence, and cumbersome military accoutrements! 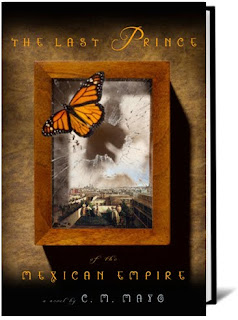 In The Last Prince of the Mexican Empire, my novel based on the true story, Sara and her mother, Mrs. Yorke, appear as minor characters in scenes set in the house of Doña Juliana de Gómez Pedraza, widow of the ex-president of Mexico, aunt of Pepita de la Peña (wife of General Bazaine) and landlady to Don Angel and Doña Alicia de Iturbide (parents of Agustín de Iturbide y Green). (Did I mention, Mexico City was a small town?) Alas, much as I nudged it, my narrative didn't find its wendy-way to Sara's pell-mell trot with General Bazaine. But the fact that Bazaine would do such a such thing informed my portrait of him. For this, as well as so many other portraits, vignettes, and more, I am much obliged to Sara Yorke Stevenson's treasure of a memoir.

Sara Yorke Stevenson went on to make what was then a very unusual career as an archeologist, a leading Egyptologist, and newspaper columnist, which you can read about here.

There is also a page about her on Wikipedia (caveat: it's a wiki).