Confederates in Mexico: A Brief Bibliography

An exotic but enduring subject of interest among U.S. Civil War history aficionados is the role played by Confederates, such as Commodore Matthew Fontaine Maury (pictured right), and later, a passel of ex-generals (Shelby, McGruder, and more), in lending, or perhaps I should say, attempting to lend prestige to Maximilian's monarchy in Mexico. After the surrender at Appomattox in 1

865, an important number of ex-Confederates immigrated to Mexico, many (though not all) with the aim of establishing colonies. To war-weary ex-Confederates, Maximilian's Mexico might have appeared a delectable glass of water, but as quickly as if left out in the Mexican sun, it evaporated. In general, the ex-Confederates' stay south of the border was short, their attempts at establishing colonies intensely frustrating, and, ultimately, catastrophic, for by early 1866, Maximilian's government, bankrupt and demoralized, and having lost its French ally, was crumbling before the Juarista onslaught. Maximilian himself was captured, tried, and then executed by firing squad in June of 1867. 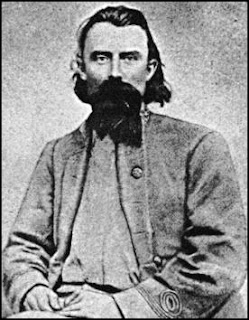 My own sense is that there is much still to be written about the ex-Confederates in Mexico, for so many of the historians of Mexico's Second Empire have lacked funding, or simply the wherewithal, to delve into the relevant Confederate archives, and vice versa--- it's nothing new that even otherwise beautifully educated Americans are more often than not woefully ignorant about Mexico and Mexican history, and, alas, the Spanish language. Serious research into the ex-Confederates in Mexico requires, at a minimum, three or more languages (Spanish and English, of course, plus French and German-- and the more German the better); deep knowledge of both Mexican politics, and Confederate politics, as well as culture, geography, terrain, mid-19th century farming practices, economics, and more. And not only all this: Mexico's Second Empire / French Intervention is an essentially transnational period, which is incomprehensible without an understanding of European and American geopolitics. Among the European actors in Mexico's French Intervention: France, of course, Austria and its dominions, Belgium, England, Spain, and-- vitally--the Vatican.

(Ay, not something to research just over a weekend! It took me more than seven years to research and write my novel about the true story of the half-American prince, Agustin de Iturbide y Green, in Maximilian's court, and I am still awed by the amount of research I could yet undertake... and I am so often tempted... )

To return to the point of this blog, which is to share my research, and so make it easier for other researchers to cover new ground:

Herewith, the major titles on the specific subject of Confederates and ex-Confederates in Mexico during the reign of Maximilian (and please leave a comment if you know of any title(s) I may have overlooked-- though, please note, with the exception of Stevenson, I am not including works that cover Maximilian and the Second Empire generally, or adventures not specifically about the Confederates, e.g., Blasio, Corti, Haslip, Niles, Pani, Ratz, Ridley, the Salm-Salms, et al. ):

Arthur, Anthony, General Shelby's March (Random House, 2010)
Note: This may be the most important recent addition to the literature on Confederates in Mexico. Alas, Arthur passed away in 2009. As soon as possible, I will make a note about this work on this blog.

Hanna, Alfred Jackson, "Role of Matthew Fontaine Maury in the Mexican Empire," An address before the annual meeting of the Virginia Historical society, January 17, 1947
Harter, Eugene C., The Lost Colony of the Confederacy (University of Mississippi Press, 1985)
McGruder, Henry R., Sketches of the Last Year of the Empire (London, 1868)
Note: The author was the son of General Magruder. The link is to my blog post about his book.

Rolle, Andrew F., The Lost Cause: The Confederate Exodus to Mexico (University of Oklahoma Press, 1965)

Terrell, Alexander Watkins, From Texas to Mexico and the Court of Maximilian in 1865 (Dallas, 1933).
Settles, Thomas M., John Bankhead Magruder: A Military Reappraisal (LSU Press, 2009)
Stevenson, Sara Yorke, Maximilian in Mexico: A Woman's Reminiscences of French Intervention 1862-1867 (The Century Co., 1897)
(The link goes to my blog post about this wonderful and very richly detailed eyewitness memoir.)

>>Finally, different as they are, the novel by Elizabeth Boatright Coker, The Grasshopper King (1981), and the movie The Undefeated (1969), starring John Wayne and Rock Hudson, both have to do with the saga of the Confederates in Mexico.

>>Confederate characters appear in Fernando del Paso's novel Noticias del Imperio and, fleetingly, in my novel, The Last Prince of the Mexican Empire.

>>For a general selected bibliography of the Second Empire, please visit my "Maximilian" page.