On Royalty: A Very Polite Inquiry Into Some Strangely Related Families by Jeremy Paxman

When I present my novel The Last Prince of the Mexican Empire, one of the inevitable questions I get is, how long did it take you to write it? It took over a decade, on-and-off, and according to my best calculations, full-time, about seven years. Why so long? Apart from actually writing it, I had to do the mountainous reading to even begin to make sense of 19th century Mexico and the French Intervention; extensive original archival research; and-- this is what surprised me the most-- get my head around the concept of royalty. And one reason it took me so long to get my head around the idea of royalty is that, for more time than I'd like to admit, I didn't realize that I needed to.

I grew up in California in the 60s and 70s, so of course, between school and the movies, I'd heard and read and seen all about the Kings and Queens of Europe, and especially, British royalty. Before our hero George Washington strode onto the colonial scene, there were the parade of Tudors, Henry VIII and those unfortunate wives, Elizabeth, and then a hop-skip-and-a-jump to wacky George III. Later, still culturally speaking very close to home, came Victoria and Albert; in the 20th century, that errant Duke of Windsor and Mrs Simpson (bless their pugs), and then of course, spanning my grandparents' latter lifetimes, my parents', and my own so far, Queen Elizabeth, always smilingly impeccable in her marshmallow-shaped hat du jour. Then came Princess Diana, her marriage, escapades, and horrifying early death. Now we have William and Kate gracing the covers of People and Hola... Never mind Americans: who on this planet isn't familiar with the British royal family?

My family background is party English but mostly Irish and Scottish with a strong tradition of, well, to put it politely, not taking royalty very seriously. In fact, my sister used to always make me laugh with jokes about the "Chuck and Di" show and, on seeing any photographs or TV on same, "Ah yes, that's why we had a revolution!" In sum, when I started my novel, I didn't think I had anything more to learn about royalty, other than the relevant dates and facts about Maximilian and Carlota, and I cannot say I felt even a shred of reverence for the institution. Alas, this was a woefully inadequate approach.

What a novel can do is give the reader the delight and the privilege of experiencing the world from someone else's point of view. Towards this end, the novelist need not ask for the reader's sympathy for the characters, but he or she does need to ask for, and earn, the reader's compassion. With a novel based on the true story of a pair of monarchs and their unlikely heir presumptive, how could I begin to construct believable characters without fully comprehending the point of view, the deeply rooted-feelings of people who were, in their blood and bones, monarchists?

And in working towards that comprehension, I believe the novelist needs to treat the characters, however imperfect they may be, with dignity for, if not, how can the reader be expected to feel the full impact of tragedy? A novel filled with nothing but snotty-silly cartoon characters is about as appetizing as a plate of sawdust. (Unless, of course, the plot, twisty puzzle, is the whole point. I don't write those kinds of novels and I don't read them either).

I don't want to write an essay here, just a blog post, so I'll wrap it up in a word: mystic. The monarch--- and by extension, all members of his or family-- play a mystic role in providing their countrymen a self of themselves. When Mexico, so briefly, was a monarchy for a second time under Maximilian von Habsburg, he and his Mexican supporters saw him as the living symbol of the nation and as such, more than a human being. In many of the histories of Mexico's Second Empire, the Empress Carlota's refusing to allow Maximilian to abdicate, even as their empire crumbled around them, is taken as evidence of her incipient madness. But I now believe, having immersed myself in reading and meditating on it for long, that given her education as not only the daughter of the King of the Belgians, but granddaughter of Louise Philippe of France, first cousin of Queen Victoria, and sister-in-law of the Kaiser Franz Josef, she understood the role, and understandably so, as far larger than her own, merely human life.

Then, shortly afterwards, Carlota did go mad, but that's another blog post.

One of the ways I found the beginnings of a path into understanding what was to me a very foreign point of view was reading contemporary British books about royalty. I'll be providing a list of those shortly. Among the most entertaining, and for me very helpful, was Jeremy Paxman's On Royalty, an affectionate, witty, and unusually perceptive meditation on the whys and wherefores of this peculiar but very human institution. 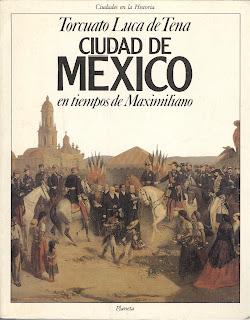 This now rare but fact-jammed book by Torcuato Luca de Tena, the distinguished Spanish journalist and literary writer who lived in Mexico, was published in 1989 by Planeta (ISBN, 968-406-217-6). Covering everything from Mexico City's pulquerías to its flower-sellers to Maximilian's sparkling palace balls, the sophistication of the theaters, the vital role of the acqueducts and surrounding lakes, the brief but influential visit of Spanish poet José Zorilla... in sum, it's a cornucopia of stories, and so well-larded with photos, illustrations, cartoons, maps, notes, and more, it is truly indispensable for anyone writing and researching this period.

... until next Tuesday because of travel. Please check back again then.
Posted by C.M. Mayo at 12:01 AM