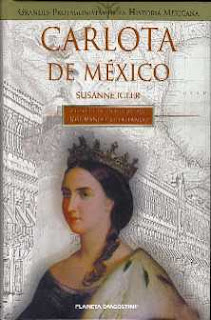 Carlota de México, Dr Susanne Igler's excellent biography of Mexico's Empress Carlota was published in Spanish by Planeta in 2002 as part of the Grandes protagonistas de la historia Mexicana series edited by Mexican historian José Manuel Villalpando. It offers a complete overview of Carlota's life, from her childhood as the princess of Belgium; her marriage to the Austrian Archduke Maximilian; brief reign as Empress of Mexico; psychotic breakdown in the Vatican; and the long years of her widowhood as a mad yet coddled recluse in Belgium. Igler's biography opens thus (my translation):

Mexican history is rich in surprising, dramatic, and even grotesque personalities, yet few have so excited the imagination, both collective and artistic, as the woman who, for a fleeting moment, was the Empress of Mexico. Today, more than 130 years after the Mexican State's struggle to define itself, there is abundance of films, soap operas, artistic testimonies, novels, plays, historical debates and -- yes!--- even restaurants named apropos of Maximilian's empire; more than the fleeting and superficial nature of this historical episode would suggest...

The work is amply illustrated with reproductions of portraits (including a charming one of Carlota as an toddler by Winterhalther), and photographs, and includes a chronology and bibliography. This is an important addition to any collection on the Second Empire.

P.S. A bibliography for The Last Prince of the Mexican Empire, my novel about the Second Empire, is here.

Originally posted at Madam Mayo blog.
Posted by C.M. Mayo at 5:01 AM