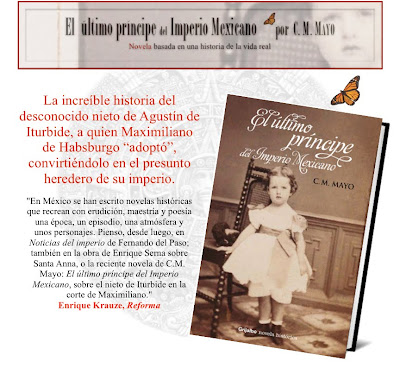 Just in time for Mexico's 200th anniversary of Independence, the Spanish version of my novel, The Last Prince of the Mexican Empire, as El último príncipe del Imperio Mexicano, translated by Mexican novelist and poet Agustín Cadena, will be published by Random House Mondadori (Grijalbo) this month. I understand it will be in bookstores in Mexico City next weekend, and in the rest of the Republic a week after that.

I couldn't be more delighted about the translation. Of course, after some two decades of living in Mexico, I speak Spanish fluently, but as my Spanish is not at the same level as my English, and as this is a story that is part of Mexico's national narrative, I felt it was very important that a Mexican novelist do the translation. I have long admired--- and translated--- Agustín Cadena, so it was a great honor that he agreed to undertake the project. An added benefit: Cadena is an expert on 19th century literature.

A fun synchronicity: Cadena is also the translator of Benjamin Franklin's autobiography, which, it so happens, John Bigelow--- then U.S. minister to France (and a major character in this novel)--- rescued. It had originally been published in a French translation from an unrevised manuscript. Bigelow purchased the original manuscript in France and then brought out the first reliable version in 1868.

For more about El último príncipe del Imperio Mexicano, including podcasts (some in Spanish), I invite you to visit the book's Spanish language webpage at http://www.cmmayo.com/espanol-el-ultimo-principe-del-imperio-mexicano.html