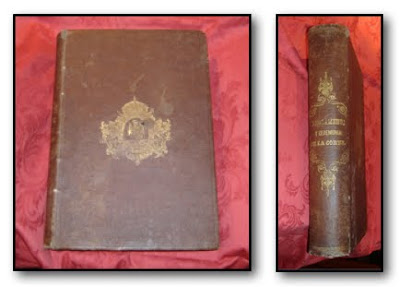 To a modern republican sensibility, one of the most ridiculous things about Maximilian's short-lived Imperial Court was its elaborate etiquette, and to many historians, a sure sign of Maximilian's superficiality his concern with such trivia as whose bench should be cushioned in velvet, what color stockings the lackeys should wear for a third-class dinner, & etc. Read the Reglamento y ceremonial de la Corte and I can guarantee some eye rolling and chuckles. But in context, the 1860s, when rigorous court etiquette was widely, from Austria to Spain to France and England, considered a crucial instrument to maintain the stability of the State-- and this when the upheavals of 1848 were a fresh memory for so many--- the Reglamento begins to look more sad than nonsensical.

It is still possible to find copies of the Reglamento y ceremonial de la corte in antiquarian bookstores, especially in Mexico City. I have seen an original--- it had been inherited, over the generations, by the daughter of a friend. It was crisply printed on luxuriously heavy paper, and beautifully bound in a faded scarlet linen cover. My first thought: this must have cost a fortune and a half to print.

My own copy of the Reglamento, which I came upon in Mexico City's antiquarian bookstore, the marvelous Libreria Madero, is not an original, but a xerox copy bound--- and this in itself is revealing--- in the heaviest, finest and extravagantly tooled sea-blue Morocco leather.

Important note: there are two editions of the Reglamento: the first, which was speedily written by Maximilian and Carlota in 1864, while en route to Mexico, and a second, published in 1866, which includes an all new chapter with elaborate detail about the Iturbide princes, whom Maximilian had elevated to the status of "Imperial Highnesses" in September of 1865. I aim to post a transcription of that 1866 chapter shortly. At this time I have a few bits transcribed, as well as some jpgs of selected chapters, and the index, on-line at my "Maximilian" page.

Here's the flashback in my novel when the Princess Iturbide (Pepa) recalls receiving her copy:

On her bedside table, next to a dish with the coil of rosary beads, is the Reglamento y ceremonial de la Corte, big as a Bible. It is being reprinted with an all-new Chapter One, "On the Iturbide Princes," specifying their rank, which is above all others with the exception of Imperial Princes (of which there are none); Cardinals; those rare few, such as General Almonte, upon whom the emperor has bestowed the medal of the order of the Mexican Eagle; and Their Majesties. Princess Iturbide may make visits in society and leave her card; however, she need not return visits except to Cardinals, Mexican Eagles, Ambassadors, Ministers of State, and their wives. When Their Majesties are on their thrones, she must place herself at their feet, on the first step, to the left of the empress. In church, her place is in the first row, and the bench covered in velvet. But she shall not be presented with the holy water. There is so much to study, too much to remember. But God will help.

"Please," said the Master of Ceremonies when he brought her this book, together with the loose manuscript pages of Chapter One. "I am at your service."

"I am obliged to you," Pepa had answered, but with the firm intention of making questions unnecessary.

But the Master of Ceremonies, rather than put the book in her hands, took a slight step backwards. Holding this tome as a waiter does his tray, he lifted the cover and then slid his glove over the small square of a certificate that had been pasted on the inside. "Please," he said, "you will see here that this book is for your personal use, however, it remains, now and always, the property of His Majesty."

Pepa had put on her spectacles. The Master of Ceremonies could have, but did not turn the book around for her to be able to read the certificate.

"Each book," he went on, "has a registration number."

His tongue pushed against the inside of his cheek. It seemed the Master of Ceremonies was going to say something more; but no. With an air of infinite reserve, he closed the lid of the book and, dipping his head slightly, presented it to her.

It was so heavy she'd had to carry it with both hands.