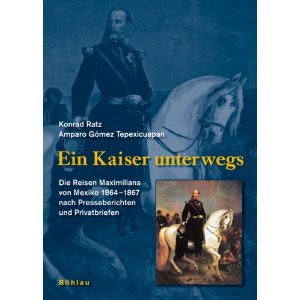 Maximilian accepted the throne of Mexico without ever having seen it-- he was crowned Emperor in 1864 in his residence in Trieste (then part of Austria, now Italy). Once he arrived in Mexico, however, he made strenuous efforts to tour the country and get to know its people, its moneymen and other key players, its natural wonders and, of course, the silver mines. As anyone who tries to write about Mexico's Second Empire soon discovers, Maximilian's (and his consort Carlota's) incessant travels make any chronology of the period headscratchingly complex.

Enter the indispensable Ein Kaiser unterwegs: Die Reisen Maximilians von Mexiko 1864-1867 nach Presseberichten und Privatbriefen* by Konrad Ratz and Amparo Gómez Tepexicuapan (Vienna: Böhlau, 2007), which details Maximilian's multitude of journeys in Mexico during the Second Empire. These include his inaugural tours of 1864 and then 1865 to the silver mines; 1865 and 1866 to Cuernavaca; October 1866 through January 1867 to Orizaba and back to the capital; and the final journey to Querétaro in 1867.

A hardcover edition with many rare photographs, documents, and new maps, a bibliography, and an index of biographical names, this is an essential addition to any collection concerning the period.

About the authors: Konrad Ratz has published many works on Maximilian and the Second Empire. His most recent is Tras las huellas de un desconocido: nuevos datos y aspectos de Maximiliano de Habsburgo. Amparo Gómez Tepexicuapan is curator of documents and flags in Mexico's National Museum of History, in Chapultepec Castle.

I understand the book will be available in Spanish soon.

*I would translate this as An Emperor En Route: Maximilian of Mexico's Travels 1864-1867, from Press Reports and Private Correspondence.