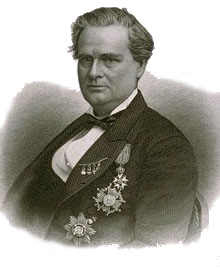 One of the enduring mysteries of Mexico's Second Empire is why, after several years of marriage, Maximilian and Carlota could not have children. In my novel, The Last Prince of the Mexican Empire, which is based on the true story of the scandal of Maximilian's "adoption" of the Emperor Iturbide's grandsons, I leave the reader to continue contemplating the mystery, for there were (and are), so many contradictory theories, many from murky sources and / or clearly and merely malicious gossip and propaganda, and not one of them do I find completely convincing.

That said, there is a theory I favor. I found it in the personal diary of John Bigelow, 1882, which I consulted in the Manuscripts Division of the New York Public Library. The U.S. Minister to France during Mexico's Second Empire / French Intervention, Bigelow later visited Mexico City as a tourist, and there he interviewed Doña Alicia Green de Iturbide, the mother of Agustín de Iturbide y Green, the "last prince." She told Bigelow that Maximilian had tried to engage a Dr Sims of New York to come to Mexico and perform an operation on Carlota, but Dr Sims asked for 30,000 dollars, a staggering sum at that time, and General Almonte refused to support such an expenditure.

Is it true? In all my forays in the archives, I have been unable to find any correspondence with Dr Sims (nor anyone else) on such a matter. However, it can be said that Doña Alicia de Iturbide is a far more credible source than most, for she knew General Almonte (he was the guest honor at her wedding to Angel de Iturbide in 1855, and, in Paris in the summer of 1866, the Almontes and the Iturbides would have been hovering together around the Grand Hotel, in wait for Carlota) and, of course, Doña Alicia herself signed the contract in which the childless Maximilian took custody of her son and nephew in 1865.

In a visit to the New York Historical Society, I did find out this: had Carlota needed surgery, the ideal candidate would have been, indeed, Dr. Sims of New York, for he was the leading gynecologist of his time, well known in Brussels, Vienna, and Paris. Originally from the south, Sims had moved to New York for his health. During the Civil War, he sided with the Confederacy and spent the duration in Paris, where one of his patients was none other than the Empress Eugenie.

Sexual Surgery and the Origins of Gynecology: J. Marion Sims, His Hospital and His Patients, by Deborah Kuhn McGregor, 1990

And here is a photo and some information about his statue in New York's Central Park.