My Recollections of Maximilian by Marie de la Fere 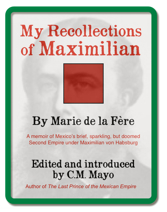 A free book-- download it here. It's been in rough form on-line for sometime but I've updated the introduction and formatted it as an ebook. (Tip: If you're using an iPad, click on "open in iBooks.")

From the new introduction:

It was the distinguished historian of Mexico, Robert Ryal Miller, who told me about this circa 1910 English language handwritten manuscript long-languishing in the Bancroft Library at the University of California, Berkeley. Very generously, as was his way, he wrote to me, knowing that I was doing archival research for my novel, The Last Prince of the Mexican Empire, and recommended that I look it up on my next visit to the Bancroft.

There is always something magical about touching old paper, running one's finger along the faded ink, but it turned out that I had to read "My Recollections of Maximilian" on microfiche-- reeling a tape through a cranky old machine in a dark room. The handwriting appeared to be that of an older person, elegant but cramped, smallish, and set down in a first draft, as if jotted one afternoon on whatever paper might have been handy, and only after being repeatedly pressed by some younger friend. In places, here a word, there a sentence fragment, were impossible to make out. But reading it was well worth the trouble, for, among so many other things, it gave me insight into the Mexican monarchists' passionate feelings for their unlikely emperor,Maximilian von Habsburg.

Younger brother of Austria's Kaiser Franz Josef, Maximilian was shanghaied by pie-in-the-sky promises into serving as the puppet emperor of Louis Napoleon's so-called Mexican Expedition. For Mexicans, this Austrian with the beautiful uniforms and splendid red beard who ended his young life in 1867 before a firing squad in Querétaro, shouting, "Viva México!" is a figure of endless fascination, ridicule, scholarly reconsidersations, gossip, paintings, operas, musicals, movies, and, of course, novels. Adding to the beguilement, his wife, the arrogantly beautiful Carlota—granddaughter of France's King Louis Philippe (the one who abdicated in 1848), daughter of King Leopold of Belgium, sister of Leopold II (of Congo fame), and first cousin to Queen Victoria— went raving mad in the Vatican and spent the rest of her long life—she died in 1927— sequestered in a castle in Belgium. >>READ MORE
Posted by C.M. Mayo at 12:59 AM