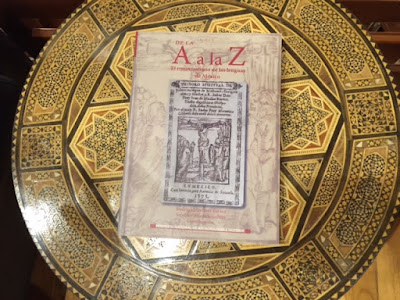 Just out in Spanish: De la A a la Z: El conocimiento de las lenguas de México (Instituto Nacional de Antropologia y Historia, 2015) a collection of essays edited by Rodrigo Martínez Baracs and Salvador Rueda Smithers. There is no English translation, but should that come to pass, the title might be From A to Z: Knowledge of the Languages of Mexico.

The last chapter is by an author scholars of the second Empire will immediately recognize: Amparo Gómez Tepexicuapan: "Los decretos en náhuatl del emperador Maximiliano" or, Emperor Maximilian's Decrees in Nahuatl. Nahuatl is the language of the Nahuas, the largest group of indigenous people in Mexico and which includes the Mexica, also known as the Aztecs.

Gómez Tepexicuapan also introduces us to Maximilian's translator, Don Faustino Chimalpopoca Galicia (1805-1877), a professor of the Nahuatl language in the University of Mexico and a supporter of the monarchy, as were so many other indigenous peoples. Of note, one of Carlota's maids of honor (damas de palacio) was Doña Josefa Varela, a descendant of Nezahualcóyotl.

"The publication of these decrees in Nahuatl shows Maximilian's great interest in the indigenous peoples. He knew from the beginning that using their language would be the surest way to communicate with his subjects, as in the deeply-rooted custom in the Austro-Hungarian Empire."

While the chapter is 11 pages, its importance makes this anthology an essential addition to any library on the Second Empire. You can find a copy from CONACULTA and also look for it in WorldCat. ISBN 978-607-484-646-1