How Mad was Carlota? 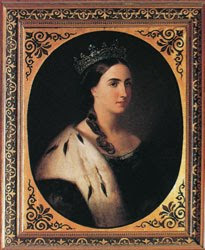 Over the past year I've done several interviews about the research behind my novel, The Last Prince of the Mexican Empire, which came out in 2009. While most this fall have been in Spanish (apropos of the Spanish translation, El último príncipe del Imperio Mexicano), a couple of new ones are on-line in English, one at Maria Ferrer's Latinabookclub.com and the other at Margaret Donsbach's historicalnovels.info.

And here is some Q & A about Carlota, from an unpublished section of an interview by David Heath apropos of 2009's "Fall for the Book" festival:

David Heath: History forms a definite frame for the story, but between the conflicting accounts and gossip, much is left for the reader to decide. How mad was Empress Carlota, for example? After all, someone really was drugging her coffee, and Maximilian’s thoughts about how to help her made me think of Charlotte Perkins Gilman’s story “The Yellow Wallpaper.”

C.M. Mayo: Yes, he said, she said, they said . . . there are many different “realities” floating around in there. To give one example, according to the memoirs and other documents I’ve seen, the party close to the Emperor Maximilian insisted that General Bazaine, head of the French forces in Mexico, was a corrupt brute, while the people close to General Bazaine held him in high esteem as a valiant soldier and capable administrator and they considered Maximilian lost in the clouds. Needless to say, Maximilian and Bazaine were at loggerheads.

As for Carlota, I think she was what we could call bipolar, and in the fall of 1866, she suffered a severe psychotic breakdown. According to her biographers, including one of her own family members, Prince Michael Greece, who had access to the family archives, she experienced psychotic episodes throughout her life, some quite violent, until she died in Belgium at the age of 86.

The bit about someone drugging her: according to an 1866 letter from Joaquín Velázquez de Léon, Maximilian’s acting consul in Rome, her doctor, Bohuslavek, alarmed by her severe anxiety (hysteria, they would have called it then), was dosing her coffee with a sedative. Well, if you were already stressed, under terrific pressure — at this time she was in Europe, desperately seeking help for the collapsing Mexican Empire — and you drank coffee but then felt oddly sleepy, wouldn’t that reinforce your paranoia?

One of the things few people realize about her is that, as the daughter of the King of the Belgians, first cousin of Queen Victoria and, most importantly, granddaughter of King Louis-Philippe of France (who abdicated after the insurrection of 1848), Carlota would have been acutely aware of the unfortunate history of the Empress Josephine. Empress Josephine, as you will recall, was considered an enemy of the State by many people, including some close to her husband, Napoleon Bonaparte, because she was too old to produce an heir. Josephine was terrified that she would be poisoned. In the end, no one killed her; Napoleon divorced her to marry an Austrian Archduchess who was, by the way, one of Maximilian’s aunts. (Yes, these royal genealogies are a tangle!)

So, Carlota’s paranoia about being poisoned was not unfounded. Furthermore, by this time there had been a number of attempts to assassinate Maximilian—and, by the way, Queen Victoria and Louis Napoleon and Maximilian’s older brother, Kaiser Franz Joseph. No doubt there were people who would have been glad to kill Carlota, though I doubt they would have bothered at this late stage (1866). Add to that the terrific stress she was under, both politically and personally. The family members closest to her, her father and her grandmother, had recently died; she was an orphan, in her mid-20s, and terribly isolated. And she was always supremely conscious of the need to maintain imperial prestige—which meant an elaborate etiquette, including the strict rule that no one could touch her, nor speak to her without her first speaking to them. No doubt this added to her sense of personal isolation.

How mad was Carlota? In the early 1880s, Alice de Iturbide, mother of the prince, openly said to Bigelow (I found that in his diaries also) that Carlota was not so mad as they made out. Well, let’s remember, Alice did not see Carlota after 1866. That said, someone who is bipolar can behave quite normally at times. And Alice was quite right that Carlota’s brother, King Leopold, famously avaricious, would have wanted control over her substantial personal fortune. But I don’t think it’s all that big a mystery. It’s just tremendously sad. Carlota was a person who had a splendid education, many talents, and an enormous capacity for hard work. She was dedicated heart and soul but, alas, to a project that shouldn’t have been launched in the first place. What I wonder is whether her mental health would have remained stable had she refused the call to Mexico. Perhaps so. We’ll never know.