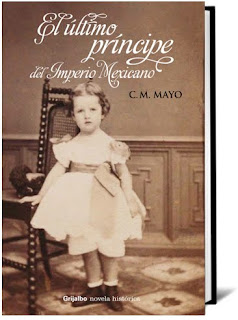 This Saturday November 27th at 6 pm at the Feria Internacional del Libro in Guadalajara, I will be presenting my novel, El último príncipe del Imperio Mexicano (Grijalbo Random House Mondadori), which is the magnificent translation by Agustín Cadena of my novel The Last Prince of the Mexican Empire (Unbridled Books).

(Last year, I presented the English version, and blogged about the fair here and here--- and also about Literal, its editor, my amiga Rose Mary Salum, and a little literary history including about Tameme and El corno emplumado. One of the people I was especially happy to see last year was Spanish and Ladino translator Trudy Balch, who, alas, passed away last month in New York. Read Trudy's fascinating guest-blog post about Mexican activist Gaby Brimmer here.)

The two writers who will be presenting my novel at FIL are Carlos Pascual (author of La insurgenta, winner of the Grijalbo award for best bicentennial historical novel), and historian Alejandro Rosas. (Alejandro also presented the English version of the novel in Mexico City last year.)

P.S. Carlos is also an actor; I think he may read a section of the novel.

The event is free and open to the public.