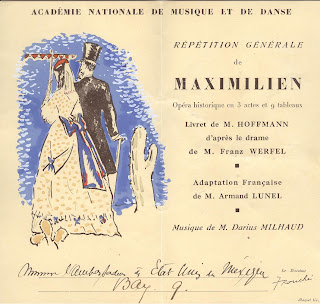 A couple of years ago, the late great Mexican art historian Don Ricardo Pérez Escamilla very generously gave me his copy of a rare French libretto and program of the opera performed in the Académie Nationale de Musique et de Danse, Maximilien (libretto by R.S. Hoffman; adapted from the work by Franz Werfel; French adapted version by Armand Lunel; music by Darius Milhaud). The libretto was published in 1931 in Vienna.

The cast of characters (my translation): 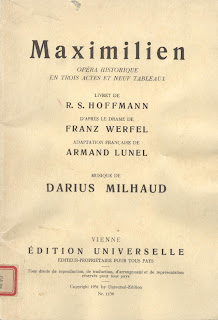 For more operas and musicals about Maximilian and Carlota, scroll down to the bottom of the Maximilian von Mexiko links page.