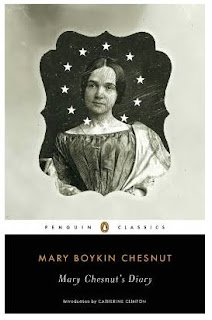 This blog has been quiet lately because I've been preparing the launch this fall of several e-books, including a few works of Maximiliana, and the e-book of my novel in Spanish translation, El último príncipe del Imperio Mexicano. (View the complete catalog here and watch my brief video about e-book cover design here.) My original intention with this blog, to share my research on (most) Tuesdays, remains firm, and to be sure, I still have many books and archives and individual documents to comment on-- so be sure to check back again next Tuesday.

This Tuesday, two notes in one. First, I'd like to recommend an article by Professor Richard Salvucci about the unfortunate fate of a very important archive of Mexican newspapers. It's news in itself, but in a broader sense, it illustrates the fragility of digital archives.

Second, a note about Mary Chesnut, author of a diary, first published posthumously in 1905 in a bowlderized version as A Diary from Dixie, and later in expanded and annotated editions, including the Penguin Classics edition introduced by Catherine Clinton. While Mary Chestnut had nothing to do with Mexico, as a writer of historical fiction, I needed to immerse myself in the vocabulary and syntax of the time. Some of my characters, most notably, the American mother of the prince and Mrs Yorke (mother of Sara Yorke Steveson), would have been contemporaries of Mary Chesnut, so hers was one of and certainly the most vivid of several memoirs I read, taking careful note, as might a poet. (As I like to say, a novel is a poem.) I had long planned to make a note about Chesnut's memoir in this blog but historian Catherine Clinton's splendid essay about her, "Queen Bee of the Confederacy," came out recently in the New York Times Opinionator, so, that covered, I warmly recommend that to you... and I'll move on to other subjects. Next post: next Tuesday.
Posted by C.M. Mayo at 12:33 AM