Joan Haslip's The Crown of Mexico: Maximilian and His Empress Carlota 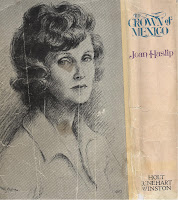 In the decades after the publication of Maximilian und Charlotte von Mexiko, Conte Corti's 1924 magnum opus, the first to rely on Maximilian's archives, several works covering the same period and personalities were published in English. The best of them is Joan Haslip's The Crown of Mexico: Maximilian and His Empress Carlota (Holt, Rinehart and Winston, 1971).

From the dust jacket:


Joan Haslip is the daughter of the late George Ernest Haslip. M.D., the original planner of the British Health Service. She was educated privately in London and on the Continent and grew up in Florence. During the Second World War, she was editor in the Italian section of the European Service of the BBC. Miss Haslip has traveled extensively in Europe, the United States, and the Middle East and has lectured for the British Council in Italy and the Middle East. She is the author of Out of Focus, Lady Hester Stanhope, Parnell, Portrait of Pamela, Lucrezia Borgia, and The Lonely Empress.

Alas, I'm away from my files and shelves for the summer; I'll have more to say about this splendid book after Labor Day.