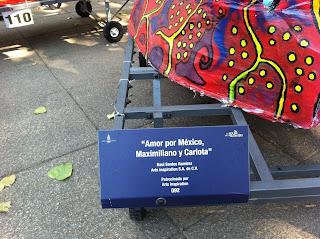 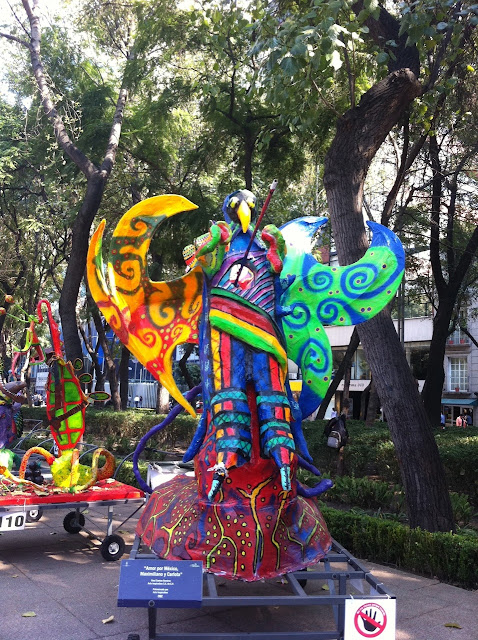 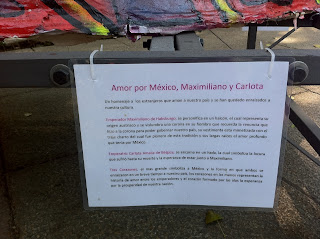 This is a post I meant to make back in (gulp) October of 2010. Thanks to sharp-eyed Rubén Pacheco, some fun snaps from the monumental alebrijes show in Mexico City, of the work titled "Amor por México, Maximiliano y Carlota." What's an alebrije? I think of them a combination of Chinese dragon and a display piñata or maybe a sculpture and an intricately hand-made candy-wrapper. This is a playful interpretation of Maximilian and Carlota's love for Mexico by Raúl Santos Ramírez. Here is a translation of the artist's own description of the work:

An homage to the foreigners who love our country and have taken root in our culture.

Emperor Maximilian von Habsburg is personified by a hawk, which represents his Austrian origin and with a glimpse of a crown to invoke his renouncing the crown in order to govern our country. His clothing merges with a charro's suit, a tradition in which he was a pioneer, and the long roots are the deep love he felt for Mexico.

Empress Carlota Amalia of Belgium, is embodied as a fairy, which symbolizes the madness she suffered until her death and the hope she had of being together with Maximilian.

Three hearts, the largest symbolizing Mexico and the way in which both sank roots in a brief time in our country, the hearts in the hands  represent the love story between them  and the heart formed by the wings the hope for this nation's prosperity.