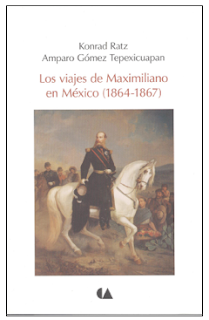 Leading historians of Mexico's Second Empire or French Intervention, Konrad Ratz and Amparo Gómez Tepexicuapan, have just published an invaluable resource for anyone studying the period-- or writing a novel: the Spanish translation of their work originally published in German, Los viajes de Maximiliano en México (1864-1867) with a fine introduction by Salvador Rueda Smithers, director of Mexico's National Museum of History (Chaputlepec Castle).

Here's hoping it sees publication in English. As I wrote about the original German edition, Ein Kaiser unterwegs:

Maximilian accepted the throne of Mexico without ever having seen it-- he was crowned Emperor in 1864 in his residence in Trieste (then part of Austria, now Italy). Once he arrived in Mexico, however, he made strenuous efforts to tour the country and get to know its people, its moneymen and other key players, its natural wonders and, of course, the silver mines. As anyone who tries to write about Mexico's Second Empire soon discovers, Maximilian's (and his consort Carlota's) incessant travels make any chronology of the period headscratchingly complex.

Enter the indispensable Ein Kaiser unterwegs: Die Reisen Maximilians von Mexiko 1864-1867 nach Presseberichten und Privatbriefen* by Konrad Ratz and Amparo Gómez Tepexicuapan (Vienna: Böhlau, 2007), which details Maximilian's multitude of journeys in Mexico during the Second Empire. These include his inaugural tours of 1864 and then 1865 to the silver mines; 1865 and 1866 to Cuernavaca; October 1866 through January 1867 to Orizaba and back to the capital; and the final journey to Querétaro in 1867.

A hardcover edition with many rare photographs, documents, and new maps, a bibliography, and an index of biographical names, this is an essential addition to any collection concerning the period.

Here's my translation of the Spanish edition's back cover:

Maximilian's travels in Mexican territory have been the object of speculation but not any in-depth research. The authors of this book aim to fill this gaps and present historical evidence of the liberal "coup d'etat" Maximilian did not achieve in nearly three months of his first tour as emperor. In detailed analysis, they also examine the activities of his second, third, and fourth tours.

Maximilian traveled the territory of his Empire intending to govern in situ. For the first time, this work shows his activities, ideas, decrees, by a day-by-day description of the receptions, and his meetings with political figures, as well as his programs of visits to schools and other public institutions.

UPDATE
Read my comments given for this book's presentation.