The Language of the Correspondence of Maximilian and Carlota

Those of you who follow this blog will have noted that the posts have become infrequent. My novel, The Last Prince of the Mexican Empire is now eight years old, and its Spanish translation by Agustin Cadena, El último príncipe del Imperio Mexicano, is seven years old, and I have since moved on to the other projects, among them, Metaphysical Odyssey into the Mexican Revolution (2014), "Dispatch from the Sister Republic or, Papelito Habla" (2017), and the book I aim to finish in 2018, World Waiting for a Dream: A Turn in Far West Texas. But gentle reader, please be assured, I will be maintaining this blog indefinitely. I appreciate your emails! Whenever some topic, event, or publication comes up that might be of interest to the general community of researchers on this most labyrinthian and fascinatingly transnational period of Mexican history, as often as possible, I will continue to post a note (or more) here.

This year has been an tumultuous one for me with multiple household moves, so I have fallen more than a bit behind with both my correspondence and my blogs. However, now that I have been able to move my library out of its jumble of cardboard boxes and into roomier quarters on nicely dusted and neatly labeled shelves, I am finally -- joy!!-- able to consult any given book with ease. 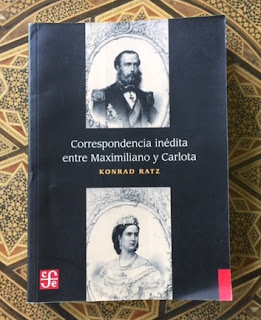 Recently, but when my library was still in its muddle of boxes, a writer friend, Amigo G., asked me if I knew, in which language did Maximilian and Carlota converse with each other? Immediately I recalled Konrad Ratz's book, Correspondencia inédita entre Maximiliano y Carlota (Unpublished Correspondence of Maximilian and Carlota), which is the authoritative answer to that subject. Now that this tome is on its properly labeled shelf, from which I can easily pull it out and have a look, I hereby offer up this brief post.

Originally published in German in 2000, Konrad Ratz's Correspondencia inédita entre Maximiliano y Carlota was published by Fondo de Cultura Económica in Mexico in 2003, translated into Spanish by Elsa Cecilia Frost. (Alas, I am unaware of any English translation.) The original documents are in the Harry Ransom Center at the University of Texas, Austin.

No one was there to spy on them with a recording device but I should think it would be safe to assume that, in private, Maximilian and Carlota would have conversed in German, his native language and the language in which they wrote to each other. And happily for us, Maximilian and Carlota wrote to each other often, for they were often apart, traveling on official business. Writes Ratz (my translation from the Spanish translation, p. 42):

"The first surprise is the quantity of the correspondence. Whenever they were apart Maximilian and Carlota wrote to each other almost daily. The private character of this correspondence is shown by their having written in their own hand and in German. Carlota used her "paternal language"* in which she makes certain grammatical and spelling mistakes, for example with articles and tenses. Some phrases are literally translated from French, her maternal language** in which she thought. Taking this into account it is astonishing how fluently she writes in German, which of course she learned from intensive reading. Here and there appear turns of phrase in French, Italian, English and Spanish."


*Her father was King Leopold of Belgium, born the fourth son of Francis, Duke of Saxe-Coburg-Saalfeld, whose native language was German.
** Her mother was Marie-Louise of Orléans, daughter of Louis-Philippe, who abdicated the French throne in 1848.


In his prologue Dr. Ratz thanks his wife Herta for her assistance in deciphering the Gothic handwriting. It is my firm view that anyone who deciphers Gothic handwriting deserves a literary sainthood and a small altar with flowers refreshed daily. (I am not kidding! If you should ever feel so moved as to give yourself a prize-winning migraine, 30 seconds of attempting to read Gothic handwriting, that's the ticket.)