Matías Romero's Visit to Springfield in 1861 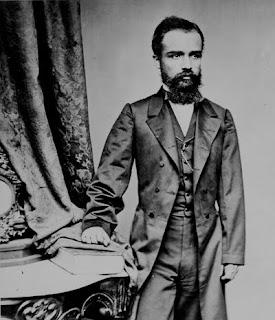 Mexican and U.S. history interlace in so many complex and surprising ways. Just this morning, while perusing the New York Times on my iPad, I happened upon "Lincoln's Mexican Visitor" by Willam Moss Wilson, about President Juárez's ambassador, Matías Romero, and his visit to President-elect Lincoln in 1861.

"Matias Romero arrived in Springfield, Ill. on the evening of Jan. 18, 1861. Though late in the day, he figured it would be easy to find a room in this sleepy midwestern town. But there were no rooms available at his first choice, the American Hotel, or anywhere else: all the hotels in town were full of friends, patronage seekers and the merely curious who had come to meet President-elect Lincoln... " READ MORE

To give you a little perspective, should you require it, 1861 was but a decade and a bit beyond the end of the US-Mexican War, in which Mexico lost vast swaths of its territory. Anyone who was or who intended to rule Mexico had to take into account the still voracious and increasingly powerful neighbor to its north. This was precisely the time when Louis Napoleon was beginning to cobble together the scheme that turned into the so-called "Mexican Expedition" and, with the blessing of the Catholic Church and a not-so-small group of Mexican monarchists, the placement-- in 1864-- of Maximilian von Habsburg upon the Mexican throne.

So: 1861. Matías Romero travels to Springfield. This was no small journey. It was a very savvy political investment, and in making it, Juárez may well have established a solid foundation for later successes, in no small part with the help of the post-Civil War United States, against the Mexican Empire.

William Moss Wilson's is a fascinating article, well worth reading.

P.S. One of the key figures working against the Mexican Empire, and for the reinstatement of the Mexican Republic, was John Bigelow, who served as U.S. Minister to France during and for a brief time after the U.S. Civil War. (He also happened to play a role in the story of "prince" Agustín de Iturbide y Green's American mother's attempts to get her son back from Maximilian--- the subject of my novel, The Last Prince of the Mexican Empire, which is based closely on the true story.) Bigelow's papers, in the Mansucripts Division of the New York Public Library, are an invaluable resource for anyone interested in this period. Bigelow took meticulous note of his meetings with Louis Napoleon, Drouyn de Lhuys (the French Foreign Minister), Dr Evans (the American dentist who played go-between), and E. Gould Buffum, the Paris correspondent for the NY Herald, among others. And of course, there are copies of
Bigelow's official correspondence with Secretary of State Seward, as well.

As for Matías Romero's magnificent archive: it is at the Banco de México in Mexico City and can be consulted upon request. Click here for a PDF document by archivist Guadalupe Monroy.
Posted by C.M. Mayo at 1:05 PM